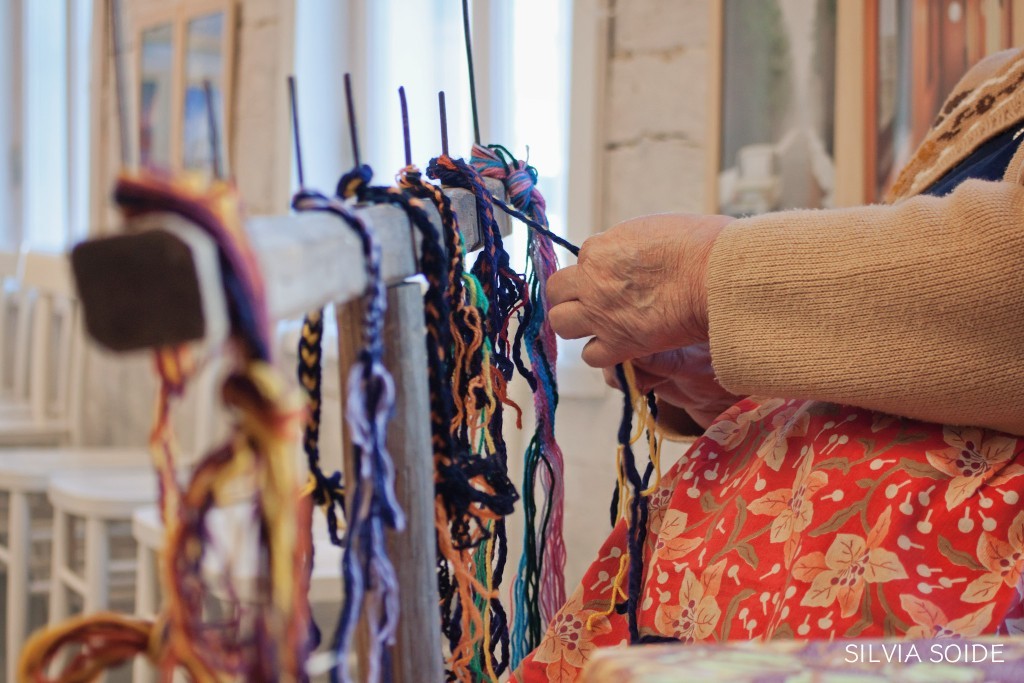 For outsiders, it may seem that people in Kihnu maintain traditions because this is what they have agreed upon and is trendy nowadays. However, this is not the case – it is natural for the people of Kihnu to live by traditions and for them, this is the only right way to live. A Kihnu woman will wear a kört for love and not for the need to impress someone. For a Kihnu woman, her traditional clothing is the most beautiful and she is most beautiful when wearing it. However, this does not mean that they will not wear city clothes. The fact that a Kihnu woman has about 60 aprons in her chest and that she changes them every day is of course for show. But it is necessary to show other Kihnu women how beautiful aprons one has in her chest.

The surrounding environment and the isolation of course help with the maintaining of love. This has also helped their dialect and cultural heritage to survive. Traditional clothes of a woman include a striped kört. The pattern of stripes and the colours vary: it may be red, half-red, with a line, blue or black. Black kört indicates mourning. Depending on the age of the deceased and how close the wearer was to them, the black kört will be changed to the blue one in about 6 months, then the one with a line and then a half-red one will be worn. Widows will never wear a red kört.

Also, a bride will not wear a red kört during the wedding because she is mourning her single life. The youth kört is not worn after the wedding, only when the woman dies is she sent to her last journey with it.

The colour of the kört dictates what colour jacket and apron a woman wears. The apron is only worn by married women; a mother of multiple children in an open marriage does not have the right to wear it. But if a married woman forgets to wear the apron, this means bad luck and it is best to prevent it. The coif is s a married woman's headdress but today it is only worn for very festive occasions. The same goes for the traditional leather shoes, which a woman puts on for very festive events. Particularly festive attire is käused, i.e. the loose-end blouse with richly embroidered cuffs, on which there is a floral scarf and a lot of beads. A silver brooch is also an important part of the attire. People from the mainland often want to know if a Kihnu woman really wears traditional clothing every day. Yes, some really wear them every day but some do not. It is certain that a Kihnu woman will wear their traditional clothing when they feel like it, not for showing off. If there is a party, a woman always wants to wear their most beautiful traditional attire. The traditional clothing of a Kihnu man is the troi. It is a hand-knitted and fully patterned sweater that is not worn every day. The troi is a valuable and expensive present and the honorary citizens of Kihnu wear the trois gifted to them with pride.

Handicraft has always been highly valued in Kihnu and since handicraft items are in daily use, the skills have been preserved. Every Kihnu woman knows how to weave fabric and to embroider but nowadays, of course, people specialise in the handicraft that they like the most. The yarns of more talented craftsmen are finer, patterns are more complicated and their handicraft is of great value.

Dancing is in the blood of Kihnu people and the will to dance is in their feet. Kihnu people start to dance at a young age with their mothers or grandmothers at parties; lately more and more young men are seen dancing with their mothers as well. Kihnu men also know how to dance and they dance, but the overall impression of the dance floor seems to have the pattern of the kört. Absolutely unique phenomena in the world are the joint round dances, which are very important from the standpoint of Kihnu folk culture.

The preservation of dancing skills is supported by the fact that children are taught Kihnu dancing and singing at school and the popular folklore band Kihnumua is active where young and old dance together.

The skill to play traditional musical instruments has increased in the past decades: almost all students are learning instruments at the heritage school, a lot of them learn accordion and violin. The most popular instrument is the accordion and even though traditionally it was played by men then today it is mostly played by women.